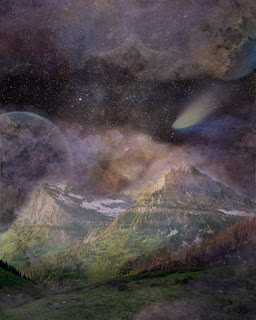 This is my latest commissioned piece. It was originally commissioned by the girlfriend of the recipient as a birthday present. So the first designs had numerous hidden images of the two throughout the piece. I incorporated several elements the recipient had noted he likes in several of my other pieces. BUT THEN, the girlfriend and the recipient broke up. Well instead of just trashing the entire design, I removed many of the elements from the piece that reflected the two when they were together and instead replaced them with brand new images to reflect the recipients new outlook - which is where the title comes from. I have contacted the recipient to see if he is still interested in the piece, and he is! So it's a good thing I didn't scrap the idea!
Posted by Russ McIntosh at 3:11 PM