The other day I found this great letter, from Austin Madison of Pixar, online.
In May of this year, Pixar animator Austin Madison kindly hand-wrote the following open letter to aspiring artists, in a bid to inspire them through times of creative drought. It's a lovely, eloquent letter, and in fact contains advice valuable to people in many a creative field. It was written as a contribution to the Animator Letters Project, an admirable effort by aspiring animator Willie Downs — mentioned on Letters of Note previously — to collate letters of advice for fellow would-be animators, penned by those who have managed to break into the industry. Although only a few letters strong at present, it's a fantastic idea with great potential.
Transcript follows. 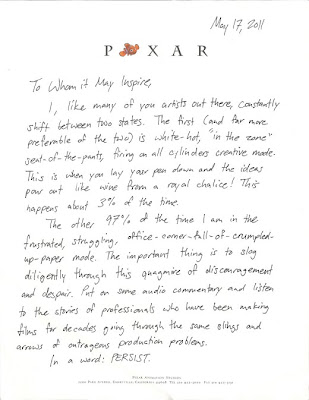 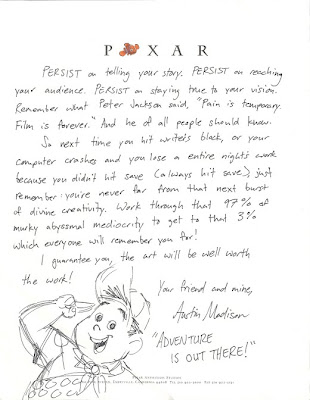 Transcript
PIXAR
May 17, 2011
To Whom it May Inspire,
I, like many of you artists out there, constantly shift between two states. The first (and far more preferable of the two) is white-hot, "in the zone" seat-of-the-pants, firing on all cylinders creative mode. This is when you lay your pen down and the ideas pour out like wine from a royal chalice! This happens about 3% of the time.
The other 97% of the time I am in the frustrated, struggling, office-corner-full-of-crumpled-up-paper mode. The important thing is to slog diligently through this quagmire of discouragement and despair. Put on some audio commentary and listen to the stories of professionals who have been making films for decades going through the same slings and arrows of outrageous production problems.
In a word: PERSIST.
PERSIST on telling your story. PERSIST on reaching your audience. PERSIST on staying true to your vision. Remember what Peter Jackson said, "Pain is temporary. Film is forever." And he of all people should know.
So next time you hit writer's block, or your computer crashes and you lose an entire night's work because you didn't hit save (always hit save), just remember: you're never far from that next burst of divine creativity. Work through that 97% of murky abyssmal mediocrity to get to that 3% which everyone will remember you for!
I guarantee you, the art will be well worth the work!
Your friend and mine,
Austin Madison
"ADVENTURE IS OUT THERE!"
VIA
Posted by Russ McIntosh at 12:13 PM

Email ThisBlogThis!Share to TwitterShare to FacebookShare to Pinterest
Labels: motivation