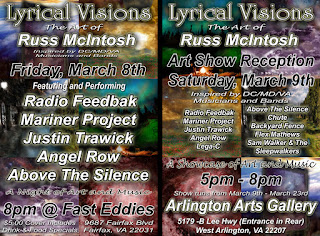 “Lyrical Visions” is the culmination of Russ McIntosh’s determination in the past year to create album artwork for DC/MD/VA musicians and bands.

Such hard work is being showcased this March with two separate shows.

Russ McIntosh’s artwork transcends genres, as he worked with a myriad of styles in music throughout the region. The DC metropolitan music scene is ripe with creative musicians, and his goal from the outset was to create something memorable for them to use in showcasing their songs.

At the recent Artomatic in Crystal City, he handed out flyers to the multitude of musicians that showcased their sound. And throughout the year, Russ has been running ads in the City Paper and on CraigsList asking musicians to submit a song to him so that he could create a piece of album artwork for them.

Russ will be featuring five of the bands on March 8th at Fast Eddie’s in Fairfax with live performances of the songs that inspired the artwork, while the images he created will be projected behind them as they perform.

Then on March 9th, Arlington Arts Gallery on Lee Hwy there will be a limited engagement showing of the artwork. Each image will have a listening station in front of it, so every patron to the gallery will be able to hear the song that inspired the work.

“Lyrical Visions” brings all the diverse styles of music throughout DC, Maryland and Virginia into a showcase of artwork that unites them all. Rap and Hip-hop stands proudly next to Rock and Heavy Metal, alongside Adult Contemporary and Indie/Alternative. 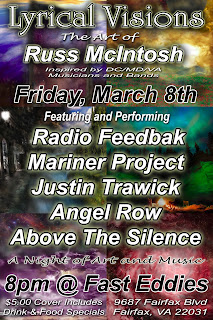 The Music That Inspired
Russ McIntosh's Artwork for "Lyrical Visions"

The show starts at 8pm with a $5 cover that goes directly to the musicians.

With a wide variety of musical stylings. There is something for everyone!

Artwork will be on display, as well as a merch table to support the musicians!

Included in your cover charge will be discounted food and drink prices!
It will be a great night of art and music! 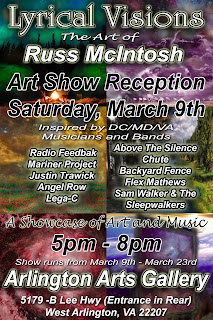 The Artwork of Russ McIntosh inspired by the songs of local DC/MD/VA musicians and bands.
A showcase of Art and Music!

This is a limited engagement to hear and view the music together, as it runs from March 9th to March 23rd. Special listening stations have been set up in front of each piece of artwork to hear and feel the music as you look at and embrace the artwork.

Expanding the horizons of perception, Russ has included musicians from a wide variety of music. Rap and Hip-Hop, Indie/Alternative and Adult Contemporary, as well as Rock-N-Roll and Heavy Metal.

Free and Open to the Public