Artomatic in the News for Mardi Gras Parade

Artomatic is back coming to Crystal City in a very big way this May! Credit: Ourvinny 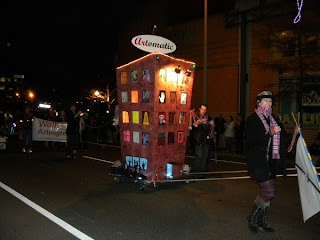 There's a little write up on the CCRPatch News site about the Mardi Gras parade I was in the other day. With several pictures from the event. And there in the last photo is the most handsomest man alive. LOL

The parade consisted of 45 floats provided by area businesses, political and civic groups, and various entertainers. Beads flew through the air to a crowd full of everyone from children to the elderly to every age in between. Many wore masks or costumes and blinked or glowed in the dark.

The local business community was well represented, from mainstays like Whitlow's on Wilson to newcomers like Trader Joe's. The latter was handing out the store's reuable shopping bags, which caused adults to push past the children to get out front. And beg.

The U.S. Park Police had horses, dogs had walkers and most everyone else had some sort of trinket to hand out. A few younger marchers had to stop occasionally and untangle themselves.

Freddie's Beach Bar impressively assembled the cast of the "Wizard of Oz," who were accompianed by Miss Gay Arlington. Artomatic, a creative arts studio soon to reopen in Crystal City, had an interesting tower as a float that was laborously pulled along to add a unique bit of performance art.

The annual Mardi Gras celebration was put on by the Clarendon Alliance.

Posted by Russ McIntosh at 2:30 PM