I recently came across a great series of videos from Fully Booked regarding the artist James Jean. I have been following this artist's career since I first saw the book cover for the comic book Fables. I love the details that goes into each of his works, and the surreal construction of his compositions. I would definitely recommend checking out his work and becoming a fan. 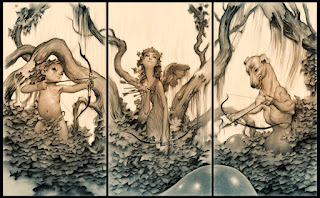 The Art and Mind of James Jean
Videos: A five-part series of short films on renowned artist James Jean.

“My design philosophy is, I think, a concentration on aesthetics, on virtuosity, on the sublime, on profanity, and on exploring the whole spectrum of visual communication and dreams,” says James Jean, visual arts virtuoso who gained popularity through his work on the covers of Vertigo’s hugely successful Fables series.

We got to sit down and talk with James during his last visit to Manila to figure out how his art makes its way from mind to canvas. We learned that James is a curious fellow: an unpretentious and unassuming Taiwan-born Asian-American with a penchant for the music of Miles Davis and Gil Evans as well as TV’s Law & Order. He seems every bit an ordinary guy. And yet, his far-reaching relevance in popular culture is evident in his illustrious client list that, aside from DC/Vertigo, includes the likes of Prada, TIME Magazine, Rolling Stone and the The New York Times to name just a few. In Manila, hundreds came for the different art forums and book signings with James, which only confirms the impact of his work.

Learn more about James Jean in our five-part series of short films.