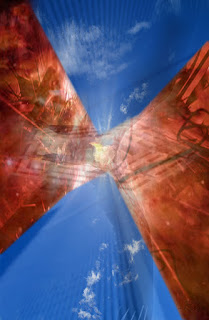 This piece was inspired by a poem from Robert Haydon Jones for the Spark website I collaborate on several times through the year. I struggled a little with this piece as I try not to do pieces that are religious, political, etc. Though the poem is not political necessarily, it still has a strong Americana stance to it. I'm not unpatriotic mind you, but the event that was the basis for this poem, has a different meaning for me than most people.

Read below to see the poem that inspired this piece.

I want to lie. I want to say they didn’t off that blue sky.
That yesterday morning when it bloomed cobalt again, I didn’t
feel a thing, not even a tweak, just hooray for the last rays of summer.

Hey, that blue September Manhattan sky has always had a double edge.
You know what I mean. Schoolstart and the baseball suddenly serious
just when you couldn’t go -- and then grown up at work cooped indoors on perfect
Beach days. Looking out. That topless blue sky like a rapture that knocks you out
if you look too long.

The girls still in their summer dresses and New York (more than ever)
a tall man’s quick step. And...and I can’t lie...yesterday and every time I look
at that blue sky, I want to look away. Because the blue and that awful day
are seared in me and on me as one interlocking brand. It hurts big time
and I want to bellow and swear it doesn’t.

So, what can I do but honor my pain? Fact is there was always pain aplenty in that
September blue. I wasn’t at Antietam -- but I was in Munich -- weren’t you too?
When they smithereened the only truce the world believed in.

That canopy has always covered our world without comment.
Without us it could be any color. The beauty is there but so is the other.
Yeah, from now on when I look, I’ll try and ride the cobalt out for all its worth,
which to my complete surprise on 9/11/2012, is not less -- but more.

Posted by Russ McIntosh at 1:13 PM